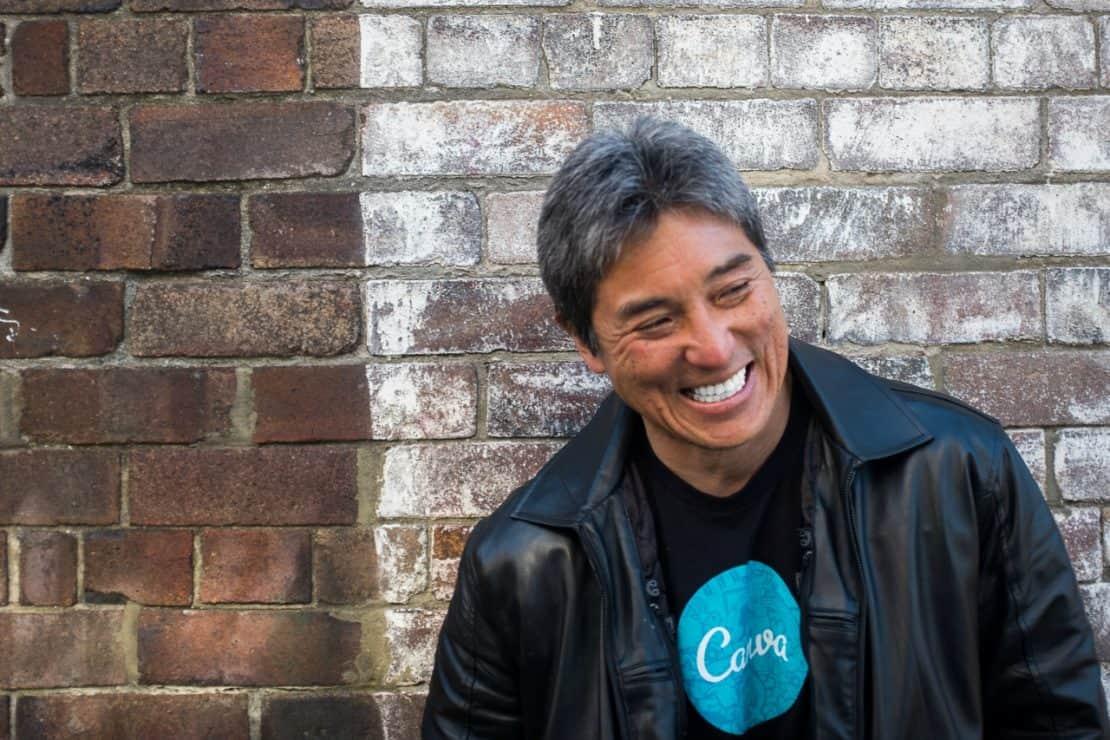 As the pace of technological development gets more and more frantic, Guy Kawasaki, the former Chief Evangelist at Apple, is on a mission to democratize computers, design, and knowledge.

In March 1959, when U.S. President Dwight D. Eisenhower signed the Hawaii Admission Act admitting Hawaii to become the 50th state, Guy Kawasaki was like any other four-year-old living in a poor area on the island of Honolulu. Now 56 years later, he has become one of the iconic figures of Silicon Valley and done things then unimaginable for a young Guy Kawasaki. Getting a Stanford and UCLA education, working for Apple, starting businesses, advising the CEO of Motorola, serving on the Wikimedia Foundation Board of Trustees and writing thirteen books. “No one foresaw or could have predicted what I’ve done,” Kawasaki ponders.

With the rise of online education, the disruption of the educational sector has become a heated topic in the Nordics. However, discussion about the future of education is understandably even more aggravated in the United States. Sky-high tuition fees in higher education, and lower education serving as a sorting system have faced strong criticism and led many of the entrepreneurial bright minds to drop out of college. Kawasaki feels strongly about democratizing education.

“I hope the school system gets disrupted. It is a fundamental moral responsibility of governments to democratize education for its people. It’s a right, not a privilege, and I’m a hard-ass who believes very few things are rights,” he explains.

Kawasaki’s journey to one of the world’s best-known marketing gurus got a jump-start in 1983 when his Stanford roommate Mike Boich got him a job at Apple. Before starting a career at Apple, Kawasaki had learned a valuable lesson while working for jewelry manufacturing company Nova Stylings – the importance of sales. In hindsight Kawasaki points out one thing that he feels is the cornerstone of successful sales, no matter how self-evident it may sound.

After Apple’s controversial introduction of the Macintosh, during the 3rd quarter of the 1984 Super Bowl, Kawasaki started his quest to turn every software developer in the world to become a Mac user and to create Macintosh products. The truly passionate people seldom mention the word passion, when talking about their attitude towards work, even if everything in between the lines emanates passion. Kawasaki is no exception.

“Working in the Macintosh Division wasn’t really ’work’ the way most people mean it because we were on a mission to change the world. It wasn’t like punching a clock or going through the motions. It was a calling.”

You never hear about the thousands of companies that fail and how hard entrepreneurship is.

1985 was a defining year in the history of Apple when the CEO at the time, John Sculley, got into a heated argument with Steve Jobs that resulted in the resignation of Jobs. At the same time, a French software developer Laurent Ribardière was negotiating with Apple about publishing the world’s first graphical relational database management system he had developed. It was called 4th Dimension or 4D. Although eventually published independently, Apple supported Ribardière’s new venture by using it for various projects. Among many other Apple employees, Kawasaki started to become well versed with 4D. He remained with Apple for the next two years, before jumping to lead ACIUS, the US-based subsidiary of ACI and the publisher of 4D, in 1987. For Kawasaki, the years at ACIUS served as great life and business lessons. Though the years at Apple had been a wild ride, the unique aspects of a startup still came as a surprise for him.

After leaving ACIUS in 1989, Kawasaki pursued his dream of empowering others to succeed by speaking and writing. From 1990 to 1995 he published six books and started to see Silicon Valley electronics firms lure in more and more money after recovering ground lost to Japan during the 80s. Kawasaki rejoined Apple in 1995 when the boom-cycle was just about to start, and things would get overheated in the Valley. At the time, Apple was living through one of the hardest chapters of the company history. In the winter of 1995-1996 Apple posted a 68 million dollar loss in the fourth quarter and Michael Spindler, the CEO at the time, was asked to resign. In the late December of 1996, Apple made the staggering announcement that it would be acquiring NeXT. That meant that Kawasaki was – again – about to cross paths with Steve Jobs.

Whether the topic is usability, design, marketing, strategy or leadership, it is hard to find a business coach that wouldn’t be using Apple – or Steve Jobs for that matter – as a case example. Looking back at all the companies he has worked for, or with, Kawasaki has a view of what is needed to form a healthy company culture.

“The cornerstone of a healthy company culture is creating a product or service that makes people’s lives better. From this, everything else flows. It means, for example, that the company is not about the egos of the founders nor of simply making money,” Kawasaki begins to explain and adds, “don’t get me wrong: Steve Jobs had an incredibly strong ego, but I never felt that the Macintosh Division or Apple was about his glorification. Apple was and is, about making people’s lives better.”

I don’t consider myself successful as an investor.

Living through the boom years, being involved in high technology companies, and getting familiar with the who’s who of Silicon Valley startup entrepreneurs had given Kawasaki a glimpse of what the life on the other side of the investment table could be like. Soon the temptation to get more involved in venture capital became irresistible. Garage Technology Ventures, an angel investor matchmaking service, and venture capital firm co-founded by Kawasaki in 1997, was where the rubber met the road. Becoming a VC might be the ultimate goal for many aspiring business students, but at the aggregate level, startup investing is far from easy billion-dollar exits and managing a portfolio filled with the coolest companies. “I don’t consider myself successful as an investor,” even Kawasaki admits.

After grinding it out for seven years in the tough world of venture capital, investing and founding companies, Kawasaki made a surprising move to join Google’s Motorola unit.

After a fairly quick one year stint at Motorola, Kawasaki was ready to get back to what he was best known for, evangelizing products. In 2014, he joined the Australian web design startup Canva and resurrected his evangelist title.

“The word ‘evangelism’ comes from Greek roots meaning ‘bringing the good news’. Apple brought the good news of personal computing. Canva is bringing the good news of accessible design. It makes perfect sense for me to work for Canva,” Kawasaki goes on to explain, and continues about his underlying values and objectives: “I’m into democratizing stuff and making the world more of a meritocracy. Apple democratized computing, enabling millions of people who could not have afforded or comprehended computing to use this new tool. Canva is also a democratizing force. It is democratizing design so that people don’t have to buy or rent expensive software and spend months learning it to make beautiful designs.”

With over 11 million followers on social media and frantically posting content, it’s fair to say that Kawasaki is one of the social media’s power users. When Facebook and Twitter came into existence, Kawasaki wasn’t afraid to jump in. Though both Facebook and Twitter are heavily monetizing their service with sponsored content, neither company is enforcing a fee for basic usage. If that were to happen, Kawasaki would be more than okay with it. Already years ago Kawasaki said that he would be willing to pay for using Twitter, today Kawasaki is a fan of Facebook and sees plenty of reasons to go along with Facebook’s current ‘pay to play’ trend when it comes to reaching his audience.

“Facebook is the best source of traffic to my website. It catalyzes the most interaction and engagement. It enables the best marketing and targeting,” he starts of by describing the value he sees in Facebook for marketing purposes, but then gets to the other reason he spends so much time in social media, “and it’s fun. Really, all social media is fun for me, but Facebook is fun and valuable.”

Another hot marketing topic of the 21st century is unquestionably content marketing. Kawasaki has been churning out valuable content through his whole career, trying out practically every channel and method available, so for him, the transition has been rather easy. “Content marketing is a good thing. It is a fair exchange: good content for attention and permission to market something. I love content marketing,” Kawasaki exhilarates. However, there’s one surprising aspect of the content marketing trend that frustrates him. Books are a serious thing for Kawasaki and even though he is known as a marketer and an author, the intent behind a book makes all the difference for him. “Writing a book as a marketing tool is bullshit. A book is an end in itself. It is art. It is not a means to an end,” Kawasaki explains.

If Kawasaki’s activity in posting content to social media is any indicator on how many books he still might have left in the tank, fans of Kawasaki can expect him to bring plenty of good news to them in the upcoming years.