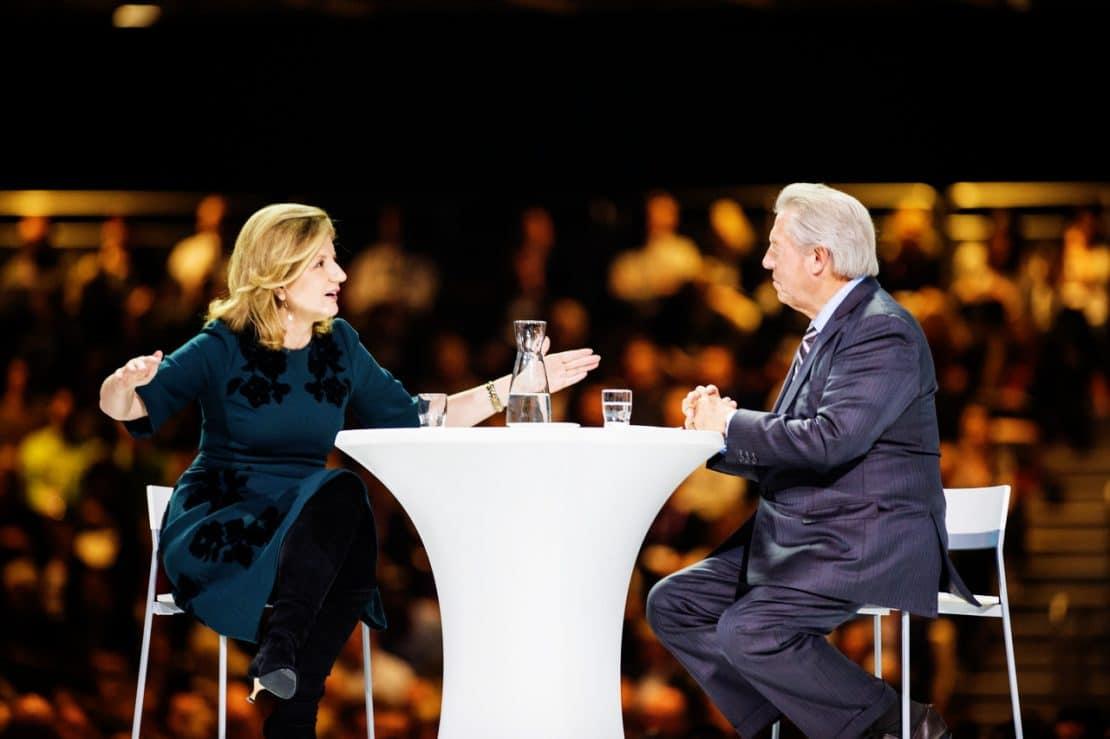 Arianna Huffington and John C. Maxwell took the stage for an extended questions and answers discussion.

John C. Maxwell: What are the best and the worst business decisions you’ve made in your life?

Arianna Huffington: Definitely the best decision was launching the Huffington Post, which was seeing the opportunity, … seeing a vacuum, seeing a need and filling it. I felt that was the case with the Huffington Post. The moment was right, we had a first-mover advantage which is incredibly important in business.

I would say the worst decision I made was something that has lead to a lot of wisdom for me. Let me start by telling you the end of the story, which is that we have a policy now at Huffington Post that we call, ‘no brilliant jerks allowed’. What…happened was that we had a brilliant jerk in a position of leadership. [This person] was brilliant but [they were] toxic. Basically [these] are people who are really good at their job but they destroy the culture of the business by backchanneling, by not being able to be direct. I tried any number of ways to tell this person … that they should feel free to disagree, to have open conversations etc, but it wasn’t working. [My] mistake was that I stayed with them too long, and I feel that when you recognize [this], letting go of people like that is an incredibly important business decision.

JM: I agree Arianna and I think many of us as leaders we don’t cut our losses soon enough, because we see the potential, you see the brilliance and you think if I could channel this person correctly it would really help the organization. But when they are toxic, as you said they were, one person, no matter how brilliant they are, aren’t worth all the rest of the people, as far as the culture is concerned.

JM: Because you are recognized worldwide for you leadership as a female, … what do you consider the most significant barrier to female leadership?

AH: Well there are a lot of barriers still, which is amazing. I mean there are institutional barriers, there are barriers in terms even in the language we use. Terms like ‘ambitious’ are used as favorable words for men but unfavorable for women – ‘she’s so ambitious, she’s so driven,’ whilst ‘John is so ambitious,’ it’s positive, right?

AH: …but for me [as a woman] it’s not positive at all. I think there is something else happening that I call the ‘third feminist revolution’. If you think of the first as giving women the vote, the second was giving women access to the jobs at the top of every profession, and that’s still incomplete. But I think in order to complete it we need the third women’s revolution, which for me is about women telling the world, ‘you know what, we don’t just want to be at the top of the world in the way that it is currently designed,’ because frankly it was designed by men and it’s not working! [At] the moment the world of work is fueled by burnout and that’s not something that’s good for women and it’s not good for men.

JM: Somebody asked me one time about the female leadership barrier, and I said I think the number one [barrier] are men! I just think [it’s] the ego of men, the insecurity of not allowing women to really grow and develop their place in life.

JM: [What] excites you right now about the current media landscape?

AH: Well what excites me is the fact that everything is changing so fast. [We] see that the way people consume news is so different and that we have an opportunity to re-imagine journalism That’s the thing that excites me more than anything, being around solutions. Because I feel that, especially with the millennial generation, they really care about solutions. I think we are all tired with the emphasis on crises. If you watch local news, especially in the states, it’s all about the burglary, the fire, and the rape. Yeah, mention all these things but is that all that’s happening in your community in the last 24 hours? No, clearly not. Now I’m not talking about sugar coating reality, I’m talking about giving an accurate picture of reality, because right now we’re not doing that.

I think one of the problems that happens is that these things are often reported as an after-thought, like a feel-good story, a ‘Christmas story’. At the Huffington Post we are putting our best reporters to cover these stories so they can give a sense of drama and narrative tension, all the good things that draw people to a story, we want to draw them to a good story too.

AH: Well I am so grateful that you asked this question because I would have to say, categorically yes! In fact I would say that whatever success I have achieved, I would have achieved that and more. Also, I would have done it with less damage to my health, less damage to my relationships and less damage to my decision-making. Ultimately leaders are rewarded for their decision-making and I feel that when we don’t take care of ourselves, when we don’t follow the advice we are given on airplanes, ‘put your own oxygen mask on first’, we are not as effective. There is so much evidence now; you simply need to read the data. Of course there are times when you have deadlines, you have things that require that kind of intensity, but the question is what do you do on a sustained basis?

JM: Absolutely. And when you used that great illustration of the oxygen mask in the plane, you put it on yourself first not because you’re selfish. You put it on yourself first because then you are able to help the child or the elderly person. And what leaders have to understand is that if leaders don’t invest in themselves, first, and if they don’t take care of themselves first – physically, mentally, emotionally, in all areas – if they don’t do that they are not going to be able to serve the people and add value to the people as they could. So I think that all of us need to learn from what you just shared in the fact that, if we take better care of ourselves we can take better care of the people we lead.

JM: How do you keep up with all the digital trends?

AH: Well first of all I love what I’m doing, I feel very blessed that I have a job that I am excited to start doing every morning. But I also have clear boundaries. I have sacred times. I never look at my devices when I am having a meal with my children or with a friend. I do what I preach, I disconnect my devices at least 30 minutes or an hour before I’m going to sleep and I read real books – do you remember those? They now have evidence that the blue light from your devices …impedes your sleep. It gets in the way of the brainwaves you need activated in order to sleep. I think it’s incredibly important for all of us to realize that we are more than our jobs. However magnificent our jobs might be, that’s not our full identity.

JM: What characteristic(s) do you believe that every leader should possess?

AH: I would say, Fearlessness and Empathy.

Fearlessness is incredibly important because so often leaders don’t take the risks that they have to take, especially in an environment like ours, which is constantly changing. You know that great book that Clayton Christensen wrote, the Innovator’s Dilemma. I love this book! It’s a little bit of a personal bible for me. So often you see successful companies who end up destroying themselves because they don’t see how the world is changing and they don’t take risks whilst they are still on top. I think it requires a certain fearlessness to take these risks, and also willingness to fail along the way, because nobody succeeded without failing along the way.

I was very lucky to have a mother who taught me from an early age, “failure is not the opposite of success, it is a stepping stone to success.” Again, it goes back to what we were saying earlier that if you totally identify with your job, you are less likely to take risks, because if something doesn’t work then it affects your very identity, you’re very survival.

In terms of empathy I feel increasingly that we need to work in teams. [Take] any start-up, most of them are founded by co-founders. I have a co-founder – Kenny Lerer. Google was founded by Lenny Page and Sergey Brin, most places were founded by two people. Maybe one of them becomes more dominant as time goes on but in the same way having a team, however huge it is, as the company grows, where the leader has real empathy with what is going on with [their team], with their needs, not just as members [or cogs in] a machine, but also [as] real human beings, is key in terms of the culture that’s built.

JM: That’s a beautiful answer and what I loved about that is … the words seemed to be opposites but they work so beautifully together. The courage to take a risk and the humility to realize that you need other people around you to make it happen.

You know Arianna, we want thank you, you’ve done a great job speaking today. When I talk to someone like you I need three hours to ask the questions, you have so much to give us, but in a short time you have given us so much wisdom out of you life and your experience and we are greatly indebted to you! 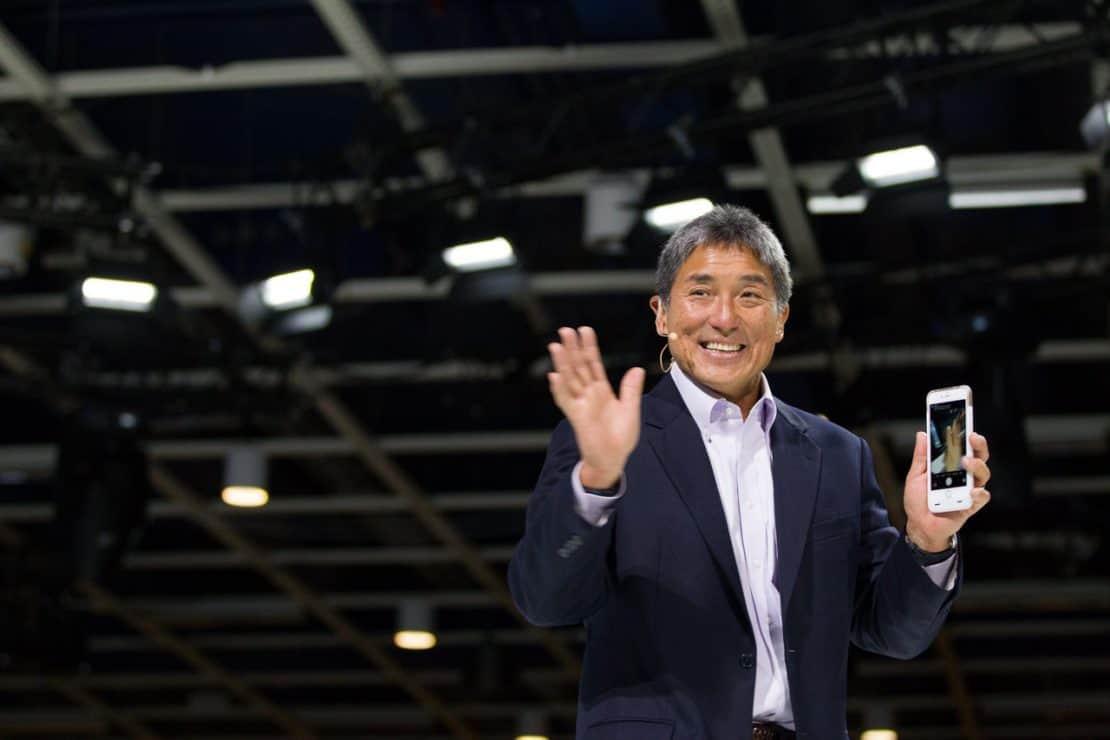