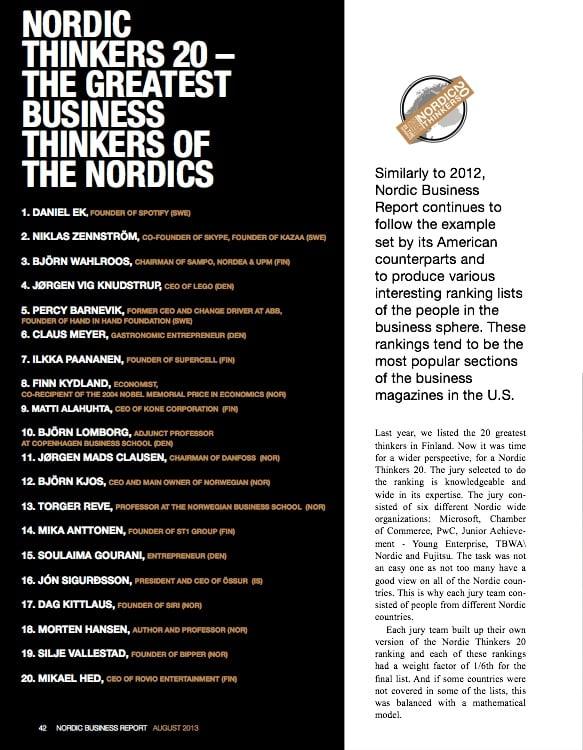 Similarly to 2012, Nordic Business Report continues to follow the example set by its American counterparts and to produce various interesting ranking lists of the people in the business sphere. These rankings tend to be the most popular sections of the business magazines in the U.S.

Last year, we listed the 20 greatest thinkers in Finland. Now it was time for a wider perspective, for a Nordic Thinkers 20. The jury selected to do the ranking is knowledgeable and wide in its expertise. The jury consisted of six different Nordic wide organizations: Microsoft, Chamber of Commerce, PwC, Junior Achievement – Young Enterprise, TBWA Nordic and Fujitsu. The task was not an easy one as not too many have a good view on all of the Nordic countries. This is why each jury team consisted of people from different Nordic countries.

Each jury team built up their own version of the Nordic Thinkers 20 ranking and each of these rankings had a weight factor of 1/6th for the final list. And if some countries were not covered in some of the lists, this was balanced with a mathematical model.

Just like last year with the Finnish Thinkers 20 list, the essential criteria used for valuing a possible candidate were:

If the candidate worked in the field of research, then the additional criteria was set to show the discipline in the research work.

The overall guidance was that mere thinking and research is not enough. The candidate must have pitched his ideas into the knowledge of the wider business world via lectures, books, blogs or as practical solutions in his or her business. There was no room for a researcher whose research as such is important but which has not lead into commercialization or is not visible in the thinking of the business sphere. As we see it, a good idea is meaningless unless it is shared.

One of the biggest surprises on the list is probably that the most successful Nordic entrepreneur, Ingvar Kamprad, the founder of Ikea, is not on it. Kamprad was surely covered in all of the discussions for the list, and greatly appreciated by all of the jury teams, but most of the jury organizations decided to leave him out of this ranking, as they wanted to put more weight on the very current business thinkers and business doers. Many other Nordic business giants faced the same fate.

Another surprise and a really sad fact is that there are only two women on the list. Many of the jury organizations had more than two on their own rankings, but as the same female names were seldom recurring on the different lists, not so many did it for the final list.

Many great thinkers were unfortunately left out, as there could be only 20 names on the final list. Some of the people that ALMOST made it to the list were, for example, Anders Povlsen from Denmark, the CEO and sole owner of Bestseller; Lars Rebien Sørnsen from Denmark, CEO of Novo; Jens Stoltenberg, Prime Minister of Norway, Ms. Vilborg Einarsdóttir from Island, founder and CEO of infoMentor, Odd Reitan from Norway, co-owner and CEO of the Reitan Group and the Finnish Linus Torvalds, creator of the Linux operating system – just to name a few.

Want to know who are on the list? Check it out on the latest issue of Nordic Business Report here »

Today, Nordic Business Report has published a list of 20 greatest business thinkers in the Nordics. The list has been formed from the opinions of a Nordic-wide jury consisting of altogether 23 people from different Nordic organizations. Spotify’s Daniel Ek took […] 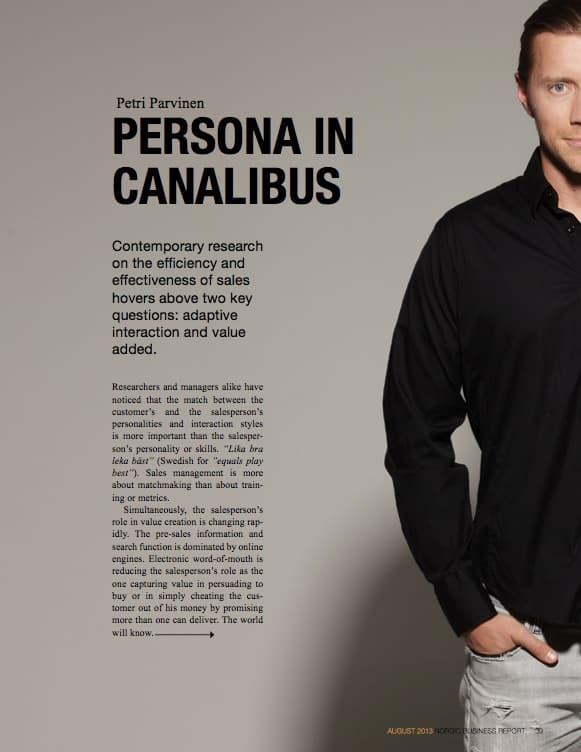 by Petri Parvinen Contemporary research on the efficiency and effectiveness of sales hovers above two key questions: adaptive interaction and value added.  Researchers and managers alike have noticed that the match between the customer’s and the salesperson’s personalities and interaction […]