Mrs. Soulaima Gourani is one of the two female business thinkers who made it in Nordic Thinkers 20 list. It is hard to believe her math teacher told her she will not get very far in her life. Tough words for a Moroccan-origin 13-year old girl.

After only two years from hearing the harsh words about not getting far in her life, Soulaima moved out from her parents, as she decided it would be better for her. Rather than going out, buying expensive purses or drinking with friends, Soulaima ran her own household. At the age of 15, that is. She repeatedly mentions her passion for learning, and tries to find her way to be with people who are superior to her – who have more knowledge and skills. “It is the only way to develop myself, I can learn from others.”

Most likely you may not know who Soulaima is. Still being rather unknown as a name in some Nordic Countries, her work creates progress wherever she goes. In her unique way, her passion is to use business as a tool for doing good things for others and building a better world. This includes for example public speaking, writing of books, articles and blogs, and working for several corporations’ boards. Since Soulaima was not born with a silver spoon in her mouth, it is natural for her to help the young in Burma to achieve a better life, to mention something hands-on she does for a living. There is so much more in and about her that I urge you to spend some time to getting to know who she is.

It seems many successful people are very much down-to-earth type of people, like Soulaima. Too often we only see them in the newspapers and magazines. The only image we get from a successful person is the one a journalist creates. Sometimes we just see the achievements, skills and wealth, and not the person. In the past, it has been very common for us Finns to underrate ourselves. Rather than thinking “If she can do it, I can do it,” we tend to think “I could never do that!”

Entrepreneurship is very close to Soulaima’s heart. Although she would probably have a chance to work in the top management of any global listed company, she says that nobody pays her salary but herself. Of course, the companies line up to have her consult them and pay a lot of money for it, and Soulaima gets to be the free spirit she wants to be. “I dare to say different. I can think, say and write whatever I want. I can call any person in the world, except maybe the president of North Korea”, she says with the lovely laughter.

I listen to Soulaima’s thoughts in wonder. It is hard to believe when she says she is not intelligent, but hard-working. I am glad I have a digital recorder, because otherwise I would forget to take notes. Many times you hear a Miss Finland say she wants to save the world. Soulaima seems to have the energy, and the means. For example, a person should not think “What job can I get?” but “What job can I create?” If this is not a starting point for the huge youth unemployment problem in Europe, what is?

Certainly, this woman must have world-class thoughts about leadership, right? Soulaima says a top leader is authentic, curious, humble and a good listener. She sends her regards to corporate leaders in the Nordics: “Listen louder. Ask more. Somebody in your company knows what should be done next.” For a traditional Finnish CEO it would be extremely difficult to ask a subordinate, and then realize the ideas he or she has, and see the ideas succeed. Thank heavens this old-school Finnish management practice is disappearing slowly, but surely.

Soulaima says hard work comes before anything else. And yet her next book is about how to create luck. At this stage the familiar word passion steps in. She tells about a research of 1,6 million people, 80 % of whom did not feel passionate about their work, or felt they got to use their key competence. How would it be possible to work hard, if you don’t love what you do? Soulaima herself is a perfect example of somebody loving her work. She runs a minute-by-minute schedule every day.

On the contrary to her math teacher’s prediction, Soulaima’s energy, choices and passion have taken her far. She was selected as Young Global Leader 2012 by the World Economic Forum. In Denmark, she has received a Rising Star award and the Talent 2004 award. In addition, she is listed as one of the top 100 talents in Europe. I think probably the best thing ever happened to her are the words from her math teacher. Don’t you? 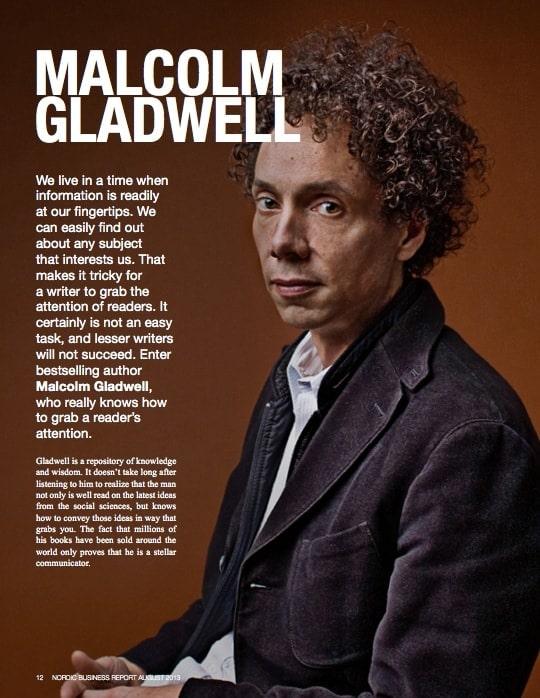 The Great Communicator: Teaching People How to Succeed

By Gina-Marie Cheeseman We live in a time when information is readily at our fingertips. We can easily find out about any subject that interests us. That makes it tricky for a writer to grab the attention of readers. It […] 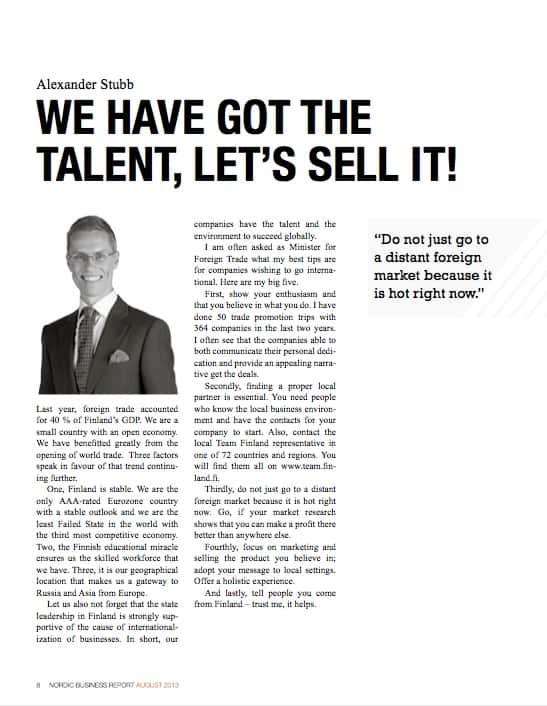 We Have Got the Talent, Let’s Sell It!

Last year, foreign trade accounted for 40 % of Finland’s GDP. We are a small country with an open economy. We have benefitted greatly from the opening of world trade. Three factors speak in favour of that trend continuing further. […]