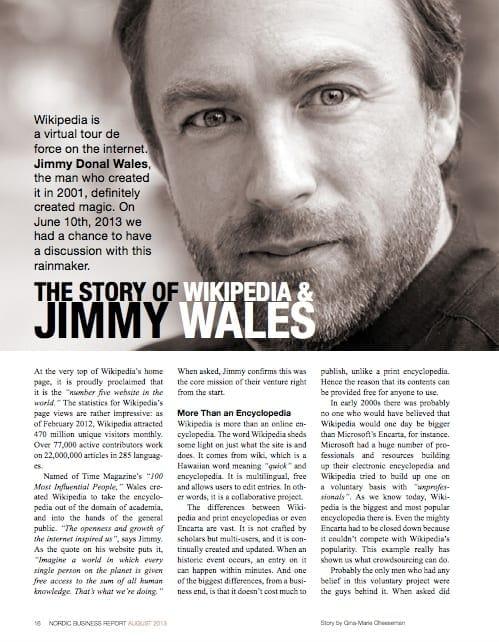 Wikipedia is a virtual tour de force on the internet. Jimmy Donal Wales, the man who created it in 2001, definitely created magic. On June 10th, 2013 we had a chance to have a discussion with this rainmaker.

At the very top of Wikipedia’s home page, it is proudly proclaimed that it is the “number five website in the world.” The statistics for Wikipedia’s page views are rather impressive: as of February 2012, Wikipedia attracted 470 million unique visitors monthly. Over 77,000 active contributors work on 22,000,000 articles in 285 languages.

Named of Time Magazine’s “100 Most Influential People,” Wales created Wikipedia to take the encyclopedia out of the domain of academia, and into the hands of the general public. “The openness and growth of the internet inspired us”, says Jimmy. As the quote on his website puts it, “Imagine a world in which every single person on the planet is given free access to the sum of all human knowledge. That’s what we’re doing.” When asked, Jimmy confirms this was the core mission of their venture right from the start.

More Than an Encyclopedia

Wikipedia is more than an online encyclopedia. The word Wikipedia sheds some light on just what the site is and does. It comes from wiki, which is a Hawaiian word meaning “quick” and encyclopedia. It is multilingual, free and allows users to edit entries. In other words, it is a collaborative project.

The differences between Wikipedia and print encyclopedias or even Encarta are vast. It is not crafted by scholars but multi-users, and it is continually created and updated. When an historic event occurs, an entry on it can happen within minutes. And one of the biggest differences, from a business end, is that it doesn’t cost much to publish, unlike a print encyclopedia. Hence the reason that its contents can be provided free for anyone to use.

In early 2000s there was probably no one who would have believed that Wikipedia would one day be bigger than Microsoft’s Encarta, for instance. Microsoft had a huge number of professionals and resources building up their electronic encyclopedia and Wikipedia tried to build up one on a voluntary basis with “unprofessionals”. As we know today, Wikipedia is the biggest and most popular encyclopedia there is. Even the mighty Encarta had to be closed down because it couldn’t compete with Wikipedia’s popularity. This example really has shown us what crowdsourcing can do.

Probably the only men who had any belief in this voluntary project were the guys behind it. When asked did he believe that Wikipedia could one day beat Encarta Jimmy answers that he believed it could, but wasn’t really sure of it. “We had a good belief in the concept. — I thought it might become a top 100 visited website on the internet,” says Jimmy.

If at First You Don’t Succeed

His earlier ventures didn’t succeed, proving that the old adage is true: if at first you don’t succeed, try, try again. In 1996, Wales co-founded the dot.com company, Bomis with Tim Shell. Bomis stood for Bitter Old Men in Suits, and featured “web rings” around popular search terms among male users. Trying to find the company’s website proves futile, as it has virtually disappeared despite having served as support for Nupedia and Wikipedia.

Before creating Wikipedia, Wales founded Nupedia, his first attempt at creating a free online Encyclopedia. Nupedia was a total failure. Articles didn’t appear on it. The difference between Nupedia and Wikipedia is that it had a system, which required very qualified contributors, and it took too long to write articles. “It was simply too heavy and difficult. There was a heavy peer-review process involved”, says Jimmy. “It wasn’t until the wiki idea came about that this encyclopedia really took off.”

Wales and Larry Sanger, who Wales hired to work on Nupedia, came up with a way to create quicker entries. The first wiki went live on Nupedia on January 10, 2001 and five days later the site was renamed Wikipedia. By May 2001, non-English Wikipedias were launched. According to Jimmy Wales’ website, Wikipedia originally was intended to serve as a collaborative “wiki-based site,” for encyclopedic content to be submitted to Nupedia, which was yet quickly eclipsed by Wikipedia.

When asked if there is something businesses could learn from this, Jimmy’s general advice is to be open and open up for your customers to contribute. If you look at Wikipedia, we really should take this advice seriously.

Jimmy himself hopes he would have made mistakes and learned from them faster. He wishes they had started with Wikipedia faster, when they saw that Nupedia is not working. Another advice for businesses: make mistakes and learn faster.

Three years after launching Wikipedia, Wales co-founded Wikia, Inc. with Angela Beesley. Wikia is a for-profit company, and is self-described as the “world’s largest network of collaboratively published video game, entertainment, and lifestyle content on the web.” It can also be described as a privately owned free web hosting service that maintains over 200,000 wikis on a wide variety of subjects. Part of Wikia is Wikia Entertainment, which grew 90 percent between 2010 and 2011. Another part of Wikia is Wikia Video Games, which contains 65,000 game wikis and 2.48 million pages of gaming content, and averages over 25,000 user edits a day.

How to Best Use Wikipedia

What is an ideal Wikipedia article? The site itself describes the ideal article as “well-written, balanced, neutral and encyclopedic, containing comprehensive, notable, verifiable knowledge.” The articles deemed to embody all of those attributes are called Featured Articles and have a small star in the upper right corner of the article. The articles deemed to be second best are called Good Articles. It may take months or years for an article to even achieve “good” status.

How should someone best use Wikipedia? Many university students have heard the professor say: “Don’t touch Wikipedia, it is not reliable.” Jimmy agrees to a certain degree. “It depends what you use it for”, he says. A university student, for instance, could get an understanding of the whole picture from Wikipedia, but then concentrate on other resources for more detailed information for academic research.

Jimmy is very happy with the quality of Wikipedia. He tells us that they have worked hard to make it reliable. As an example, everything needs to be cited. It is incredible how much you can find on Wikipedia and how easy and useful it is in most cases everyday. The site recommends using it “carefully” for research. Check the sources listed at the bottom of each entry. And if you find that something is incorrect, become a Wikipedia user and correct it. That’s the beauty of a collaborative, online encyclopedia. 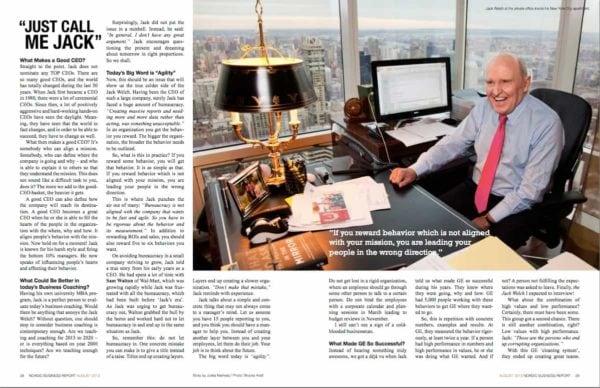 by Jukka Niemelä Mr. Hans-Peter Siefen and I had the unique opportunity of interviewing Jack Welch. Expecting to interview a cold-blooded businessman, we were disarmed by his warm laughter and a request: “Just call me Jack, ok.” What Makes a […] 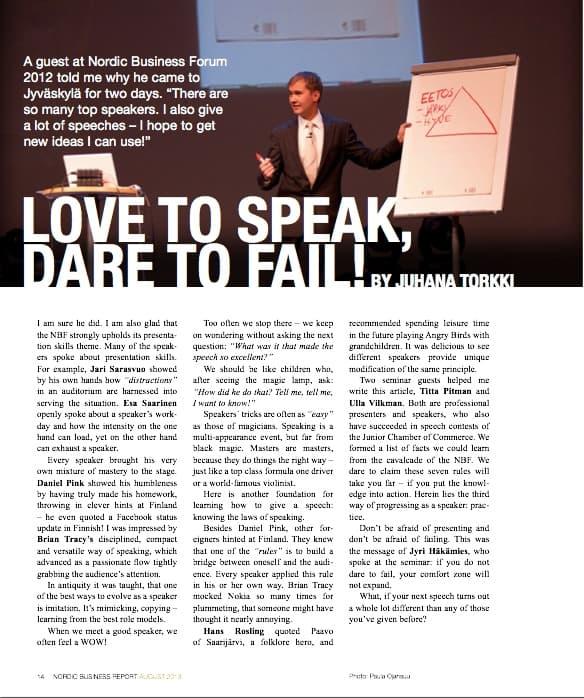 By Juhana Torkki A guest at Nordic Business Forum 2012 told me why he came to Jyväskylä for two days. “There are so many top speakers. I also give a lot of speeches – I hope to get new ideas […]