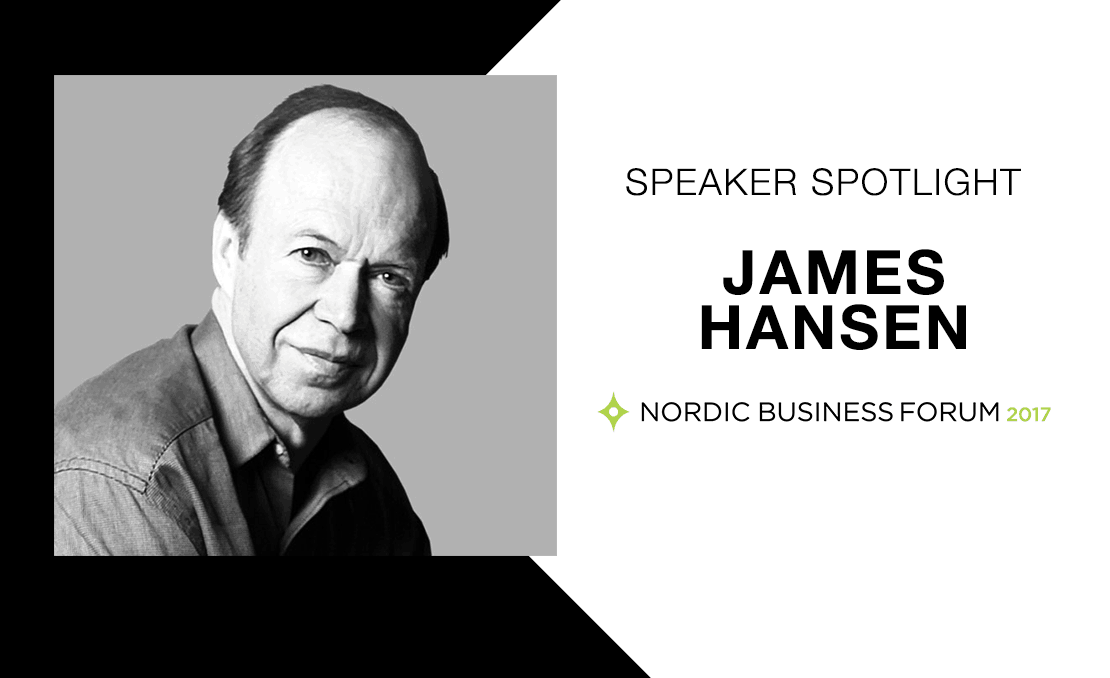 James Hansen | Justice for Our Children

To continue our 2017 Speaker Spotlight series, we welcome the esteemed Dr. James Hansen!

What will the world look like in 100 years? How about in 50 or 25? Experts have proven that climate change is no longer a phenomenon that we can afford to overlook or rationalize with natural climate variability. Tangible effects of it begin slowly, but we are already starting to see some of its consequences affect people around the world. But when we are faced with the worst case scenario, it’s difficult to know where to start solving the problem. To help future generations inherit a clean world, we must turn to the experts to show us the way forward.

Dr. James Hansen, former Director of the NASA Goddard Institute for Space Studies, is our expert. He shared his views on climate change with us and discussed his current court case with Our Children’s Trust against the US Government.

Nordic Business Forum: Why is it important for people — and scientists — to keep speaking out about climate change? Do you think they have understood the immediacy of the problem?

James Hansen: The public and most politicians do not understand how dangerous the situation is. That is not surprising. The climate system has a delayed response to human-made changes of our atmosphere’s composition because the deep ocean and thick ice sheets have a great deal of inertia. They do not respond quickly, and as such, it takes decades — even centuries — to respond. That is why it is a dangerous and difficult matter to deal with.

By the time people realize that change is underway, there is a lot more change in the pipeline that cannot be stopped. The principal climate effects will be felt by young people and their offspring. If high fossil fuel emissions continue, eventual effects include the loss of coastal cities within as little as 50 to 150 years. Regional climate extremes are already increasing.

NBF: Climate change has often been discussed in terms of individual efforts. Can companies also make a valuable contribution to the climate change conversation?

JH: Yes. Most CEOs are smart — a lot smarter than typical politicians. They know what is needed to move from fossil fuels to cleaner energies, and it is not subsidies for solar panels! The best thing they could do is encourage governments to put a steadily rising across-the-board tax on fossil fuel (oil, gas, coal) emissions. In order for the public to accept this, and in order to improve the economy rather than depress it, I argue that the money collected from the fossil fuel companies should be distributed uniformly to the public. I call this a “fee-and-dividend” system. Most economists agree that it would work, and there have been no effective alternatives suggested.

NBF: How would the “fee-and-dividend” system look in practice?

JH: The fundamental fact is that as long as fossil fuels are cheap, somebody will burn them. The price of fossil fuels would be made to rise steadily by collecting a rising carbon fee from fossil fuel companies at the domestic mine or port of entry. All of the funds should be distributed equally to all legal residents. Economic studies show that this would spur the economy, increase gross national product, and create millions of jobs.

The United States burned five billion tons of fossil fuel carbon dioxide last year. A carbon fee of $55 per ton would yield $275 billion, or $1,000 for each adult, $3,000 for a family with two or more children, if children get half a share, for up to two per family. This market-based approach provides incentives for the public and businesses, rapidly phasing down fossil fuel use and modernizing infrastructure.

The United States could quickly make the carbon fee near-global by imposing it as a border duty on products from countries that do not have an equivalent carbon fee or tax. Most countries would prefer to have their own fee, rather than let the US collect the money at the border.

NBF: The court case that you are currently working on — Juliana v. the United States — alleges that the federal government has failed to uphold the youth’s’ constitutional right to a livable climate by encouraging the use of fossil fuels. How did you get involved in this case?

JH: Mary Wood, a legal scholar at the University of Oregon, read the article that I wrote in the New York Review of Books, the “Threat to the Planet”, and other articles that I wrote. She used these in writing articles in which she developed the public trust doctrine for the climate case (i.e. the common law that the present generation of adults has a responsibility to future generations, including a responsibility to leave the atmosphere and climate in good condition). She called me in 2010 and I agreed to work with her, so I attended a workshop in Eugene, Oregon in the fall of 2010. There, I met her and Julia Olson, another lawyer who would found Our Children’s Trust. I decided then to enlist a group of leading international scientists to write a scientific paper to describe how rapidly fossil fuel emissions would need to be reduced if young people are to inherit a healthy planet without climate disasters in the pipeline. Our aim is to make the story clear enough that a judge can understand the situation.

I had actually started talking about the rights of young people being violated before I met Mary and Julia. I looked at it from the standpoint of Equal Protection of the Law, and analogous to civil rights. In our present case against the U.S. government, we are placing equal emphasis on Equal Protection/Due Process and the public trust doctrine.

NBF: You have been working on this case for two years since it was initially filed against the Obama administration in 2015. What do you hope to achieve?

JH: The United States is, by far, the biggest source of the excess carbon dioxide in the air today (even though China is the biggest emitter today). The U.S. must take responsibility and begin to reduce emissions rapidly, or the climate problem cannot be solved.

The suit will show that the government, by authorizing and subsidizing production, transport, and burning of fossil fuels, is substantially responsible for growing climate disruptions that could lead to irreparable harm to young people. These federal actions, we assert, violate young people’s constitutional rights to life, liberty, property, and equal protection of the law. We expect to win the lawsuit, but that will not be enough. We could win the battle in court but lose the war. Indeed, unless the public understands the situation, and asserts its potential to use the democratic process, young people will be consigned to diminishing prospects for their future.

Continued high emissions for decades will lock in a warmer ocean, likely pushing the system beyond a point of no return, and will melt the ice shelves around Antarctica and Greenland. Loss of coastal cities would become likely. Other climate disruptions would be magnified.

The court may require “all deliberate speed,” as it did with civil rights, but it cannot usurp roles of the executive and legislative branches. It may even require the president to report on progress in reducing emissions. But that guarantees almost nothing about solving the global climate problem.

NBF: You have often been cited as the grandfather of climate change, especially given all the scientific publications you have on the subject. What impact do you think this case has on the climate change debate?

JH: I think it’s really important because the U.S. has to provide some leadership if we want to get global emissions to fall rapidly. Because of the power of the fossil fuel industry in the U.S., the executive and legislative branches of the government will not do their duty unless the judicial branch requires it.

The Trump administration is trying to get the Court of Appeals, which is the level between the United States District Courts and the Supreme Court, to intervene and stop or delay the trial, which is scheduled for the 6th of February, 2018. That is highly unusual. I do not think they will succeed in that effort. It is important for the trial to proceed without delay.

We’re excited to learn more from James Hansen at NBForum 2017! We’re already sold out, but if you’d like to hear Hansen and other leaders discuss this year’s themes of purpose, responsibility, and leadership, be sure to grab your Live Stream license today. Follow us on Facebook (@NBForumHQ) and Twitter (@NBForumHQ and #NBForum2017) to keep up with our speaker announcements as we get closer to the event! 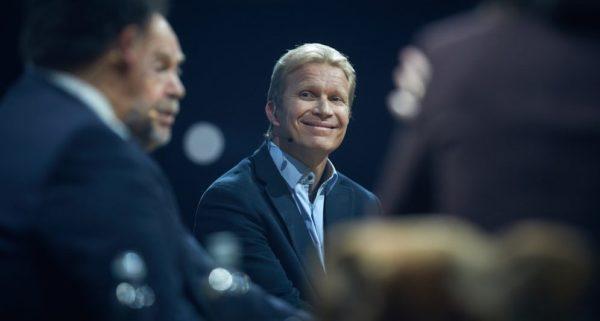 Speaker Spotlight The world needs a new way of thinking. Climate change has made headlines for years, and the secret is out on the underlying problem: fossil fuels. The fundamental problem in finding solutions has been the gap in our knowledge; […] 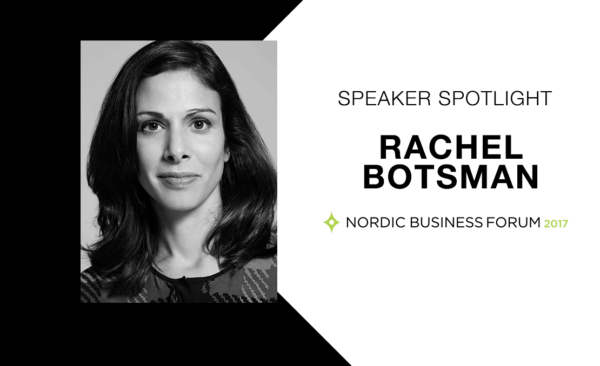 To continue our 2017 Speaker Spotlight series, we are proud to present Rachel Botsman! Speaker Spotlight Welcome to the new era of trust. New to town? Stay with Airbnb. Need a ride? Go with Uber. Want a date? Head to […]