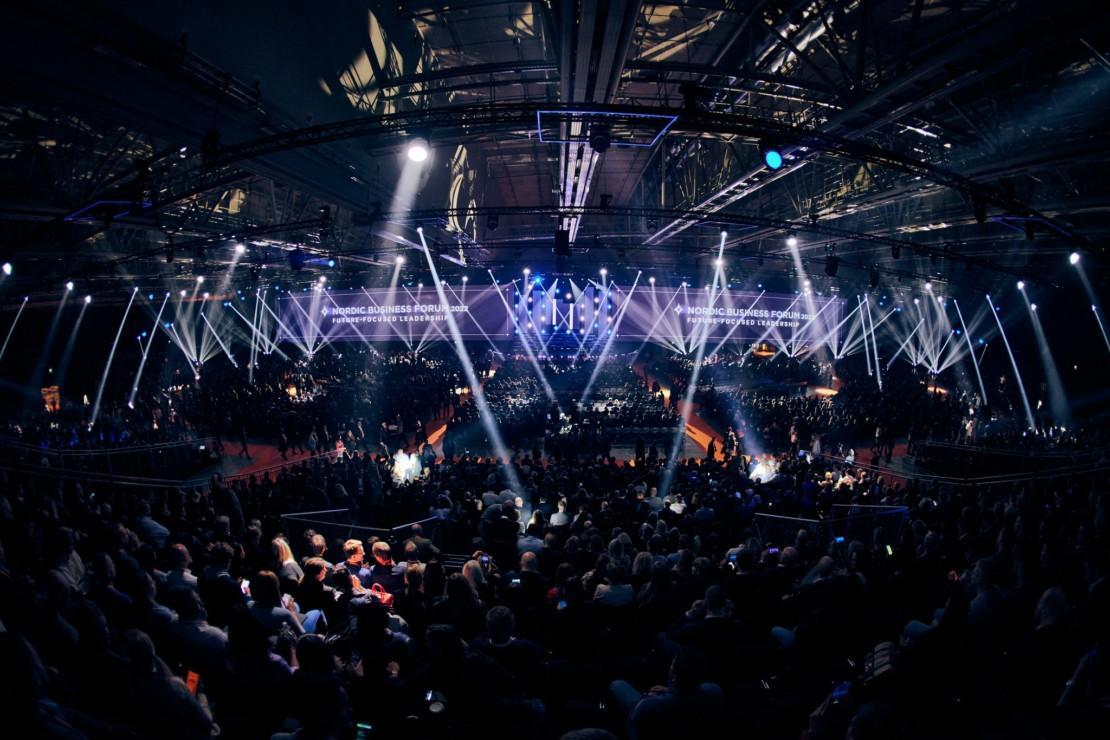 After more than three years of planning, pivots, and preparations, a 7000-strong audience of business leaders packed out a buzzing conference hall on day one of the 2022 Nordic Business Forum to explore the ideas of the thinkers shaping our discourse around the future of work.

With businesses being nothing without their people, and culture being the backbone on which all businesses thrive, we’ve compiled the key takeaways shared by our day 1 keynote speakers below.

Miki Kuusi and Kristel Kruustük: The Best Talent Now Holds All the Cards

In an inspiring opening discussion featuring two of Northern Europe’s most influential Young Business Owners, Kuusi and Kruustük both acknowledged that talent now holds all the cards when it comes to making the next career step – and this is a good thing.

Technology and globalization have led to increased competition from global competitors, as well as democratizing access to job opportunities. This has led to employers stepping up their game, and as Kruustük noted, “people are looking to make more impact by connecting with each other through purpose.”

A key driver of purpose is culture, which is why Kuusi told the audience to “define what distinguishes your company in terms of culture – and how you monitor it.” By doing so, leaders will understand how they can build global teams that have more common values and shared goals.

Also, in recognition of the new power dynamic in hiring processes, they will also be able to better sell the intangibles to the best talent.

Do you know how to sell your company to jobseekers, or are you still in “buying” mode?

“We are Homo Puppy – we are self-domesticated human beings.”

While quite the statement, Bregman’s commentary on the child-like playfulness of modern humans is based on new sociological breakthroughs that show people to be fundamentally good, and not the savage beasts kept in check by a hierarchical, Hobbesian veneer of civilization.

Bregman revealed the flaws in this thinking by highlighting the findings of a new global study of incident camera footage in which the vast majority of bystanders took steps to assist those in distress. So much for the bystander effect.

He continued by taking a look as uniquely human genetic traits like blushing and the whites of our eyes that make us stand out from our fellow primates. Why select for a visual queue that gives away our emotional state, or make it easier for people to build trust through eye contact if basic goodness isn’t intrinsic to our survival?

He closed his keynote with the example of Norway’s Bastos prison, in which instead of being treated like dirt, inmates are treated like human beings. As a result, they have the lowest recidivism rate in the prison system. People react positively to humanity, decency, and connection.

Is your leadership style based on whether you belief people to be fundamentally good, or bad?

Drawing on her experience as a Corporate Anthropologist – and her time spent researching voodoo practices in Togo, Kramer took a captivated audience on a journey through the symbiotic relationship between cultural creation and the impact culture has on the people encompassed by it.

At their heart, cultures are built on a shared view of what we find meaningful and manifest through the everyday actions and choices of people. As an example, directive cultures create top-down leaders, and facilitative cultures lead to more democratic leadership styles.

But culture is not a static thing. It changes and evolves. “We should not look down on people that are not acting in line with our culture. Instead, we should ask what it is they see,” said Kramer when exploring how companies can unearth ways in which culture can evolve.

In conclusion, Kramer explained that culture is nothing if it is not acted on. We may disagree with child labour, but many of us wear wearing clothing made by children. We need to act differently to truly live out our values.

Which actions demonstrate the values of your own company’s culture?

Erin Meyer – How to Talk the World’s Language

Are you aware of how national cultural differences are impacting your organization’s culture?

While Meyer’s work focuses on mapping the component parts of culture along 8 behavioral scales, she chose to focus her keynote on three aspects that most directly impact the greatest facilitator of culture – communication.

Low and high context: when explicit, simple, and literal communications are offered to people from nuanced, layered, and implied cultural backgrounds, what is said by one party may be wildly misinterpreted.

Direct and indirect negative feedback: Equally, the directness of a Dutch executive colleague may come across as rude to a business executive when feedback is given.

Comfort with silence: A Finn will often sit silently at a US conference table, waiting for a turn to talk that will never materialize. He is being patient, polite. His US counterparts think he is being disengaged, rude.

As a leader, you need to be aware of these differences by giving people room to speak, nudging critical feedback towards indirect, and “learning to read the air around the words.”

While uncertain times often lead to business taking a cautious approach that prioritizes “flawless execution,” this way of thinking is not only a remnant of our 20th century production line business heritage, it’s also the exact opposite approach needed to build a future-proof organization.

As Edmondson asked the audience to consider – “Are you playing not to lose – or playing to win?” If you feel that workers need to be a little afraid to perform, then you’re wrong. Meaningful conversations will move from the meeting room to the hallways, and leaders will be unaware of the true state of their organizations.

To combat this, Edmondson advised leaders to foster a culture of psychological safety – giving employees permission for candor. Tied to stretch goals, this philosophy will allow for intelligent failures that lay the next steps for more meaningful progress.

In closing, Edmondson told leaders they could lead their culture in the right direction by acknowledging failure as part of innovation, admitting to their own mistakes, and asking good questions (and responding productively to them) in a way that encourages participation.

So, are you playing not to lose – or playing to win?

In January 2020, Petter Stordalen’s Strawberry Group was the largest hospitality chain in the Nordics. They had recently purchased the iconic Kämp hotel group in Finland. They had acquired a travel group – airplanes included. The only thing they were missing was a cruise line. Which they also bought.

More importantly, according to Stordalen, they had built “a culture where your personality was way more important than your CV.” Their annual group conference, considered by some to be a €6 million expense, was the most important thing they do in his eyes.

Then Covid hit. And the world changed. Stordalen quickly went from acquisition mode to survival mode. He sought out global experts to understand the facts – and continually modify his understanding – as the pandemic developed. Next came a major overcorrection, where assets, holdings, and equity were sold to ensure the survival of his group. And, while times were tough, every company pulled through.

“We don’t close hotels – we open them. We don’t reject guests – we welcome them. And we were done with viruses. Experts told us to shut, but we had the people and culture to handle everything.”

Today, the group is stronger than it’s ever been because they were able to meet crisis with smiles.

Want to get the leadership learnings from Nordic Business Forum 2022 Day 2 as well? Dive into them here! 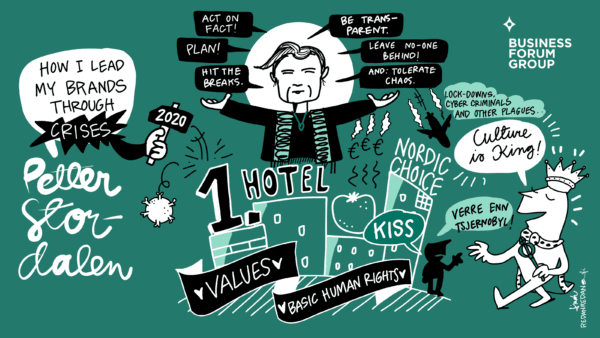 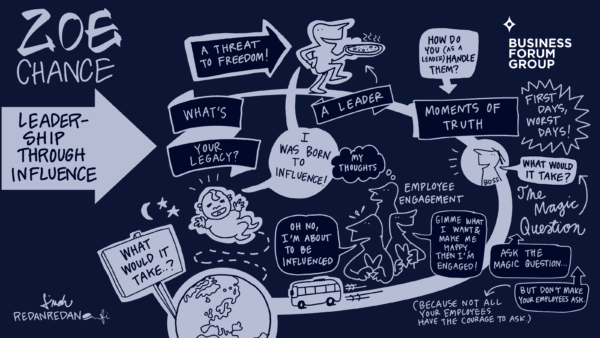