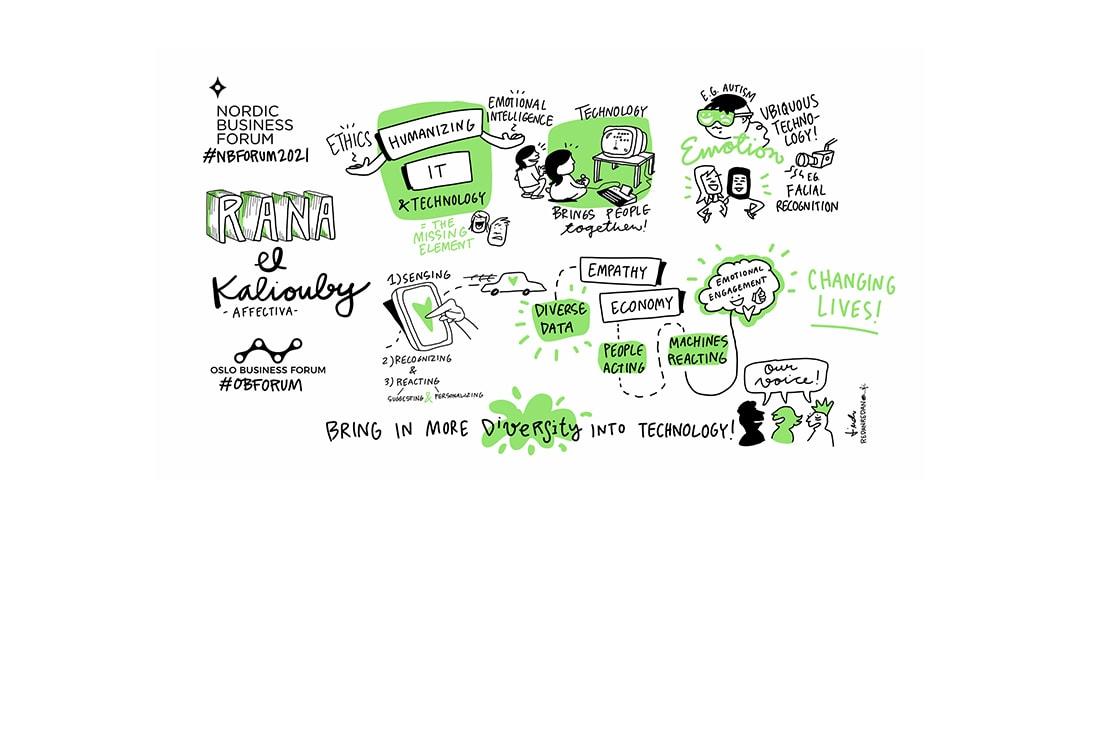 On 16 March, together with Accenture, we hosted a webinar with Affectiva co-founder and CEO, Rana el Kaliouby. During the session, el Kaliouby offered her insights on emotion AI — the technology that analyzes human expressions and reactions in context. She also recounted her personal story as a female entrepreneur inventing this new field in a technology world dominated by men.

Here, we give you a brief summary of el Kaliouby’s keynote.

From Cairo to Cambridge

“I’ve been on a mission to humanize technology over the past 20 years,” el Kaliouby stated to kick things off.

Her quest got its first spark already during her childhood. El Kaliouby is an Egyptian-American who grew up in Cairo. Both of her parents are technologists, so from early on she was exposed to technology. For example, she and her sisters played a lot of video games, which brought them closer together. “It then stuck with me that technology can really change the way we connect and communicate with each other. And that’s been the common thread of my work over the years.”

She started to pursue her passion for computer science by actually mastering in the field. Already at the beginning of her studies, the human-machine interface was the issue that fascinated el Kaliouby the most. She eventually got a scholarship to go to Cambridge University to do her Ph.D. to build the first-ever emotionally intelligent machine. “I wanted to capture all of the non-verbal signals that we use to communicate with each other by building algorithms that can detect and identify our facial expressions, and map it to a number of emotional and mental states.”

Towards the end of her Ph.D., she met Rosalind Picard, an MIT professor whose work el Kaliouby had been following for some years. Picard invited el Kaliouby to join her group at the MIT media lab. They then started a project to use el Kaliouby’s technology to help children with autism get better at understanding and identifying emotions.

Soon, they noticed that the project sponsors (many of which were Fortune 500 companies) wanted to buy this technology and use it for different purposes. “This was an academic setup. There was no product – it was essentially a prototype. But it quickly became apparent that we had a unique opportunity to commercialize this, so we started Affectiva.”

When they made a trip to the Bay Area to find funding, she explained that they intentionally tried to avoid using the word “emotion” as the people they were pitching to were primarily older white men. “The funder community is so not diverse, and we need to do better.” Therefore, she is now dedicated to not only support female founders but funders as well.

Many funders declined, but eventually, they were able to get the initial round of funding which set them in motion. “To date, I’ve raised over 50 million dollars in both strategic and VC funding for Affectiva.”

The Rise of the Empathy Economy

“AI is engrained in the fabric of our lives, acting on our behalf.” However, the problem today according to el Kaliouby is that AI is very focused on IQ not EQ. “Most of our focus on AI is on the cognitive intelligence, but nobody is really thinking about the emotional intelligence of these devices – it’s the missing element.”

So, the question that el Kaliouby asks is: what if technology could identify emotions just like humans can? Or what if learning apps could detect the emotional engagement of students and adapt the content accordingly? And what if your car sensed you were drowsy and took over control? Or what if Siri had empathy? Those are the issues Affectiva and el Kaliouby want to tackle with emotion AI.

In relation to the empathy economy, el Kaliouby raised a few points:

Basically, el Kaliouby argued, that the issue for companies in the future is to be able to leverage technology in order to scale empathy. “Human perception AI will be ubiquitous forever transforming how people interact with technology and with each other in a digital world.”

Behind the Scenes of Building Emotion AI

El Kaliouby first explained that humans infer the mental states of others by 55% facial expressions and gestures, 38% how the words are said, and 7% the actual words. So, over 90% of our communications is actually non-verbal. Thus, emotion AI technology like the one that Affectiva is developing is crucial for deploying emotional intelligence.

According to el Kaliouby, the key in creating emotion AI is to ensure that the data is as diverse as possible. You need to take into account numerous attributes such as gender, age, race, and appearance. She actually highlighted that it gets pretty complicated very quickly as also for example the environment the people are in needs to be taken into account.

Cultural differences make this even more complicated as well. “For example, we’ve found that collectivist cultures, like Japan or China, tend to not want to display negative emotions publicly. So it’s really important that we incorporate that in our benchmarking of these different algorithms. It’s again another great example of the fact that if your data is not diverse enough when creating these technologies, it’s not going to work globally.”

The Importance of Diversity and Inclusion

Multiple times el Kaliouby emphasized the importance of not only diversity but also inclusion. “We need diverse voices around the table to architect, develop, design, and deploy these technologies. And we need to make sure that our organizations are inclusive about these voices. It’s not enough to bring diverse people to the table. We also need to listen to what they have to say.”

So, what are the ways for leaders to see how their organization is doing in terms of diversity and inclusion?

“The obvious one is to just look at the team composition on different levels.” El Kaliouby advised that you should really take an honest look at your employees, executive team, and board of directors. Are all the different levels of your organization diverse and inclusive?

Another thing you as a leader can do is to take a look at what your company stands for. “I think you need to listen to what a company’s priorities are. If diversity isn’t one of the priorities, then they’re not really prioritizing it and being intentional about it. It’s not just going to happen accidentally in my opinion. We need to be very systematic about how we solve these issues.”

To conclude, el Kaliouby had three pieces of advice for all business leaders: 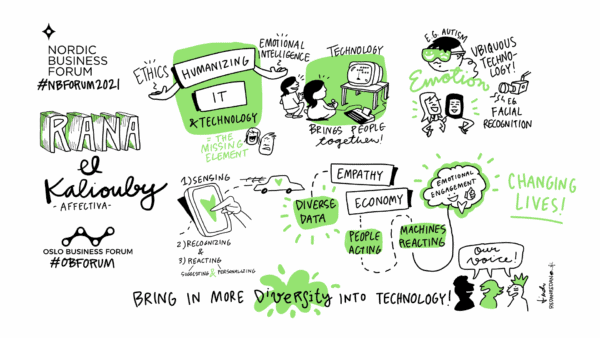 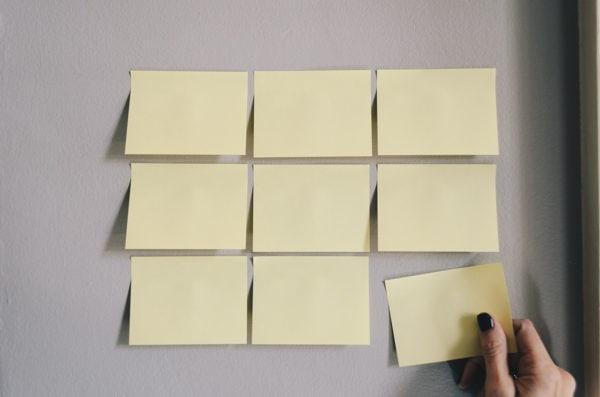 On 11 March, we had an intriguing discussion about simplifying work with Lisa Bodell on Clubhouse. Bodell gave us so much food for thought that we wanted to share a few pieces of advice here too. Why is simplicity so […] 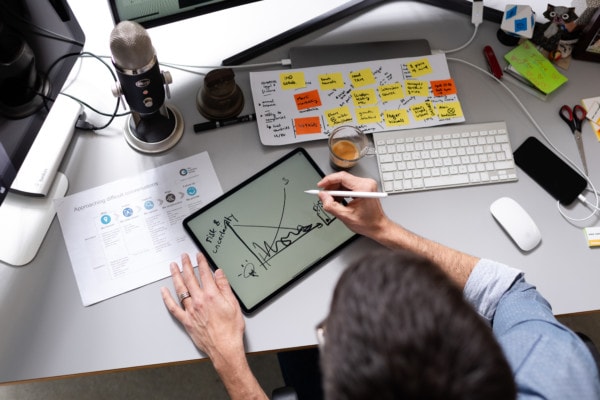 On 18 March, we hosted a Clubhouse discussion with Alex Osterwalder, one of the world’s leading innovation experts and co-founder of Strategyzer. Osterwalder shared several important points related to innovation and he also shared a few specific insights on business […]