If Don Tapscott, the co-founder and chairman of Blockchain Research Institute, is to be believed, the digital age is entering its second era, in which blockchain will become the foundation technology. “During this uncertain time in our history, the technology genie has once again escaped the bottle,” Tapscott told the crowd of 7,500 at the Nordic Business Forum in Helsinki. Key Points: • The digital age is entering its second era which includes, for example, AI, machine learning, blockchain, technology in our bodies, drones, robotics, and virtual reality. • Blockchain technologies resolve the ‘double-spend problem’ and increase trust in digital transactions. • Blockchain technologies and AI together will be transformative for nearly all industries and fundamentally reinvent our institutions. • In the near future, companies will look less like corporations and more like networks. Questions to consider: • How is the industry you operate in affected by the change in the digital age? • Is your company ready for these changing times? • Can your company utilize blockchain technology? • How can your company find leadership for this digital change? You can also find a written summary of the keynote at https://www.nbforum.com/event-summaries/ Don Tapscott, CEO of The Tapscott Group, is one of the world’s leading authorities on the impact of technology on business and society. He has authored over 15 books, including Wikinomics: How Mass Collaboration Changes Everything, which has been translated into over 25 languages. Don has been advancing groundbreaking concepts for over 3 decades. His 1992 bestseller, Paradigm Shift, helped coin this seminal management concept, and The Digital Economy, written in 1995, changed business thinking about the transformational nature of the Internet. Two years later he helped popularize the terms “Net Generation” and “the Digital Divide” in Growing Up Digital. Don’s most recent and ambitious book was co-authored with his son, startup CEO and bitcoin governance expert Alex Tapscott. Blockchain Revolution: How the Technology Underlying Bitcoin is Changing Business, Money and the World was published in May 2016 and is, according to Harvard Business School’s Clay Christensen, “the book, literally, on how to survive and thrive in this next wave of technology-driven disruption.” In 2017, Don and Alex co-founded the Blockchain Research Institute whose 70+ projects are the definitive investigation into blockchain strategy, use-cases, implementation challenges and organizational transformations. Don is a member of the Order of Canada and is ranked the 4th most influential management thinker in the world by Thinkers50. He is an Adjunct Professor at the Rotman School of Management and Chancellor of Trent University in Ontario. It is hard to imagine anyone who has been more prolific, profound, and influential in elucidating today’s technological revolutions and their impact on the world. #nbforum #nbforum2018 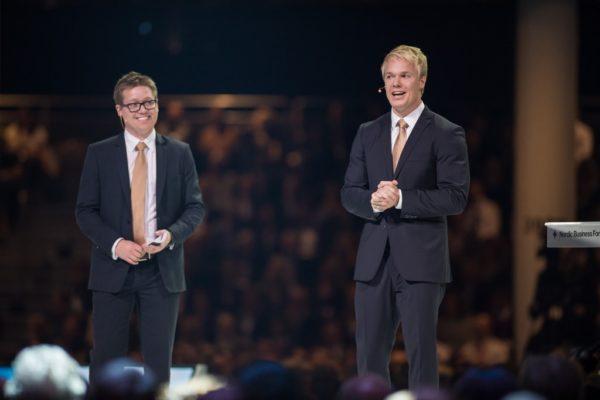 Don Tapscott, CEO of The Tapscott Group, is one of the world’s leading authorities on the impact of technology on business and society. He has authored over 15 books, including Wikinomics: How Mass Collaboration Changes Everything, which has been translated […]